From the architect. Royal House Recording represents a new approach to inspiring the creativity of today’s recording artists. It functions as a small campus with an array of amenities and private courtyards that help artists break from the generic confines of a typical studio. This adaptive re-use project is situated along Delemere Avenue in Royal Oak’s primary industrial corridor, providing the privacy and flexibility required for its users. Built from the remains of an old manufacturing warehouse, Royal House Recording intends to help bring back the status of Greater Detroit’s legendary past in the music industry. 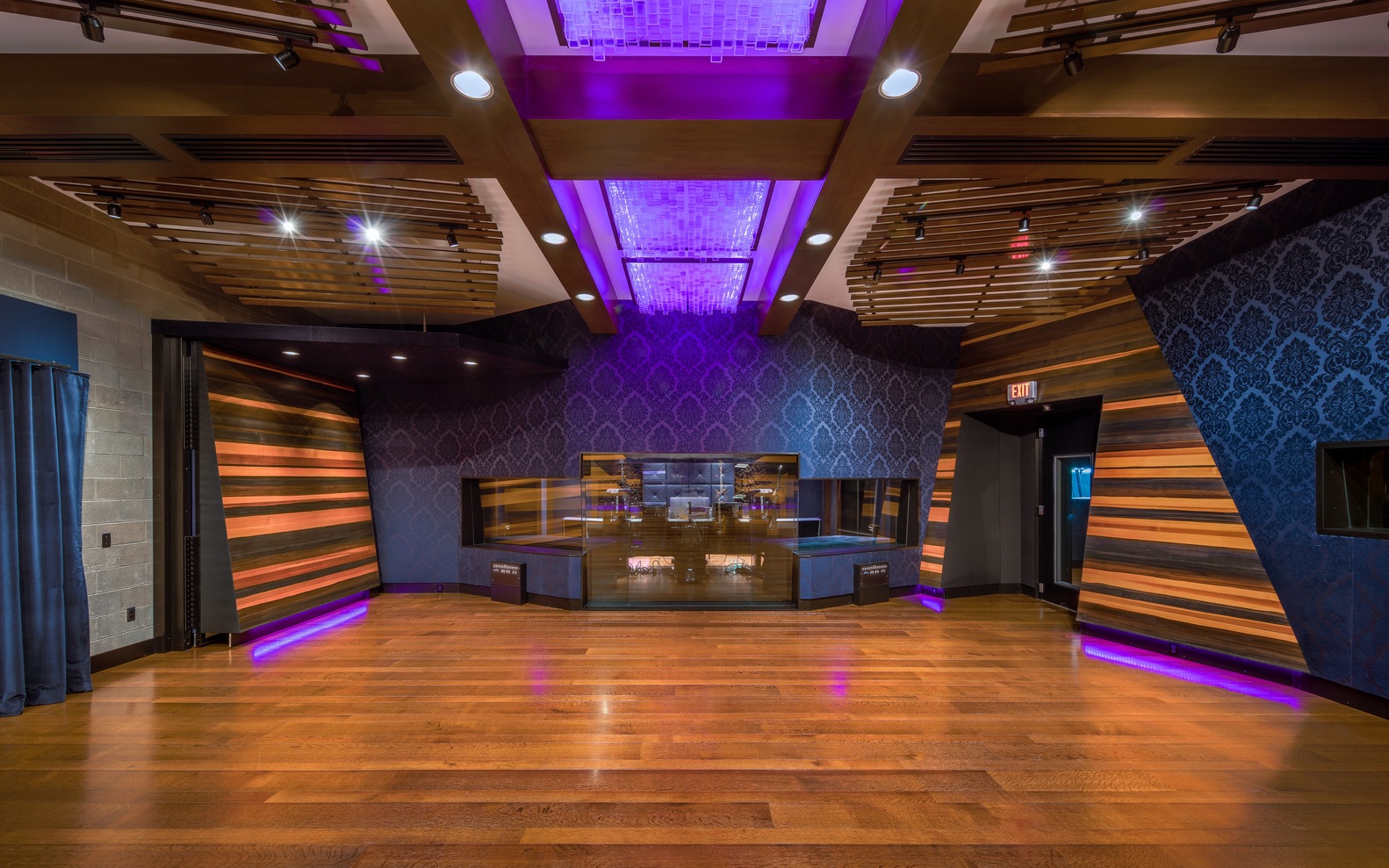 This fully equipped studio accommodates every need of its artists for intense recording sessions. It is supplemented with a kitchen, lounge, exercise room, basketball court and outdoor patio. These amenities allow the artists to work with an uninterrupted creative flow. The campus is entirely enclosed with a perimeter wall creating a private environment for the high profile artists. 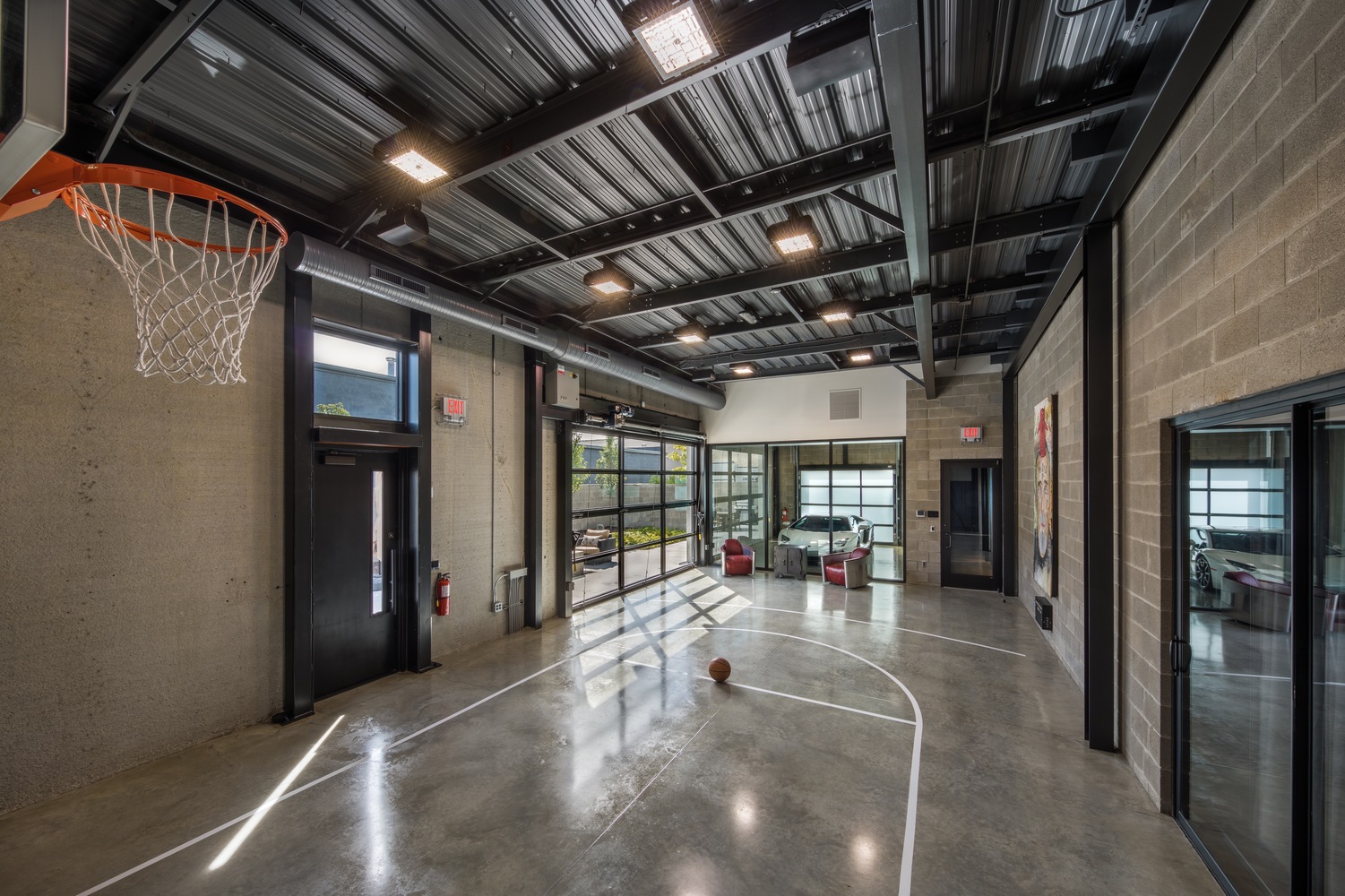 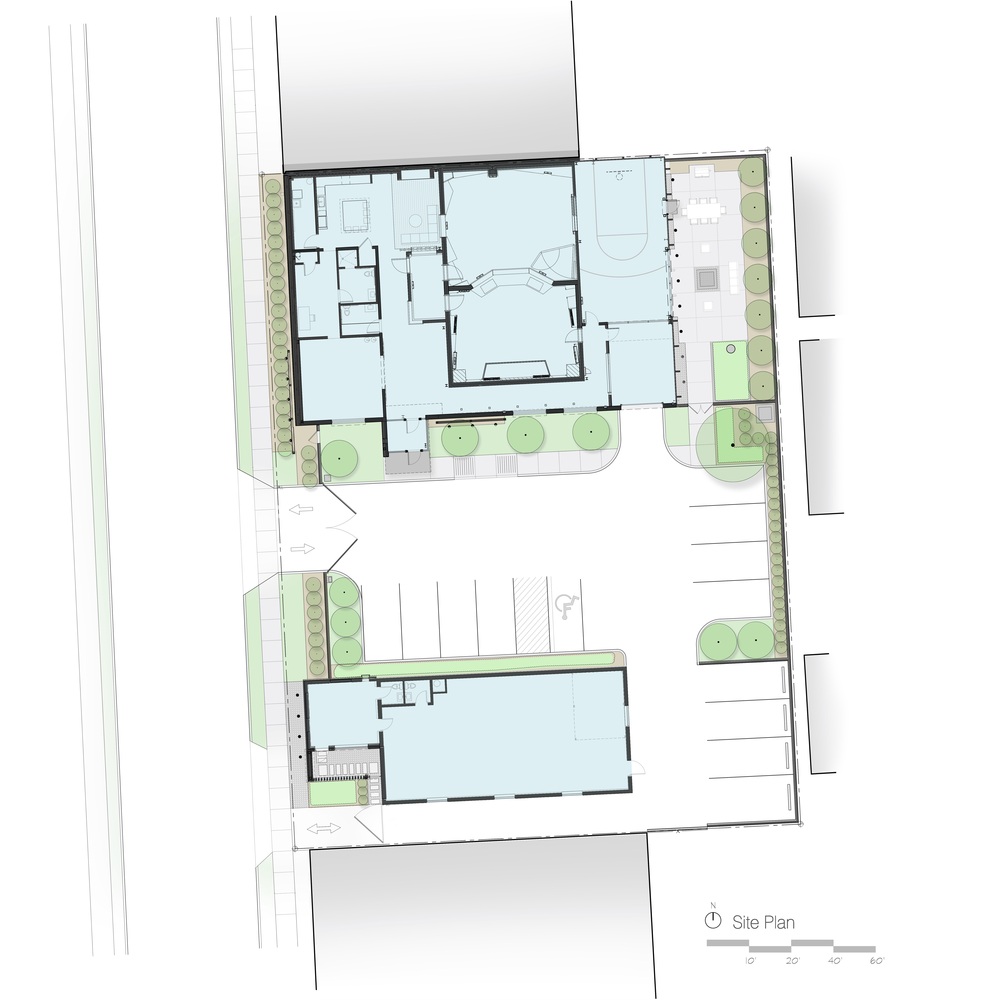 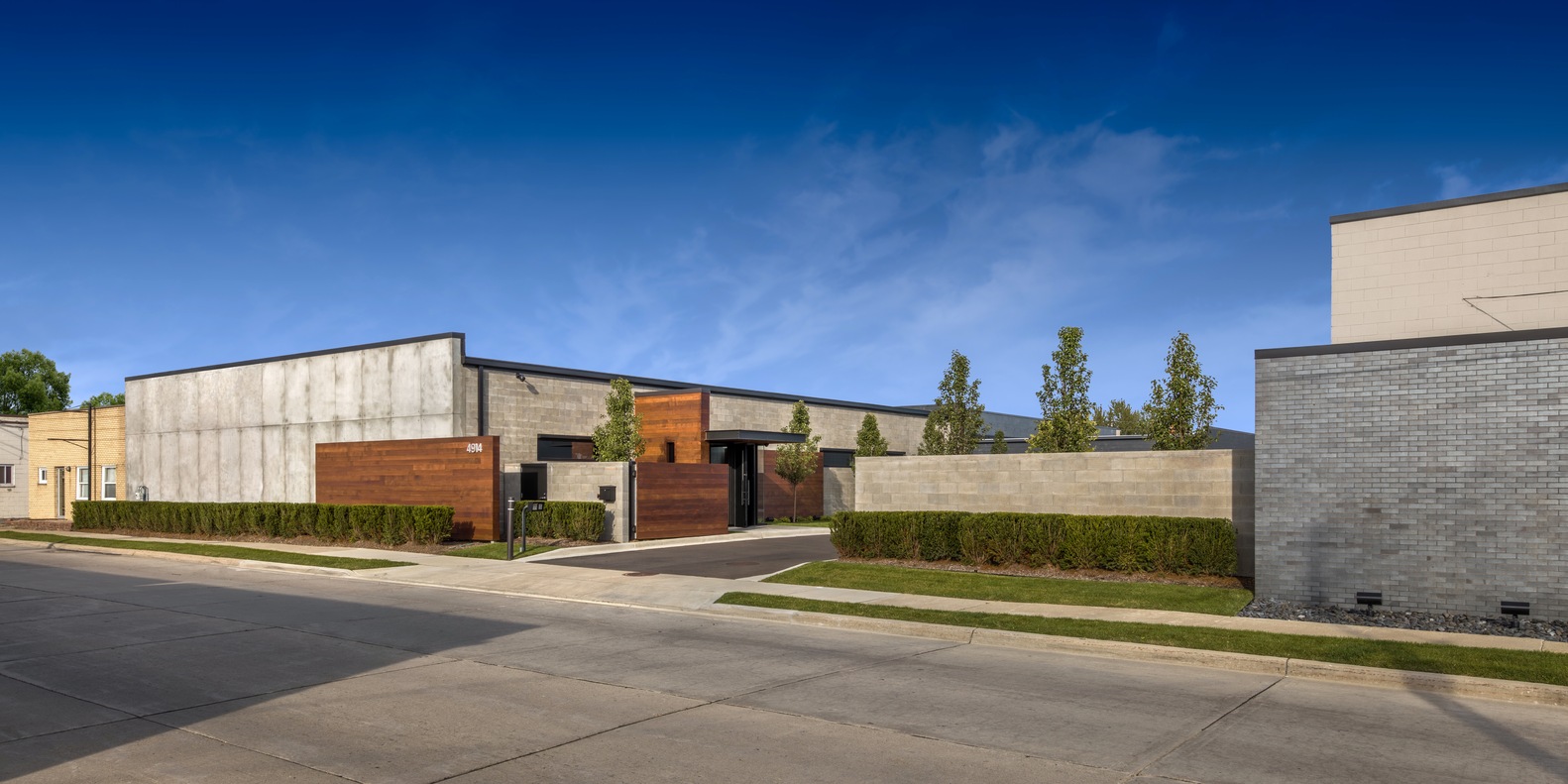 The building’s exteriors take cues from the original industrial aesthetic yet is accented by a glass entry, custom steel doors, and a large glass and steel bi-folding hanger door. Free-standing red cedar screen walls provide warmth and contrast while lush trees and shrubs soften the courtyard landscapes. A pierced brick privacy wall serves to shield the entrance of the secondary office and storage building from the street and creates yet another private courtyard. 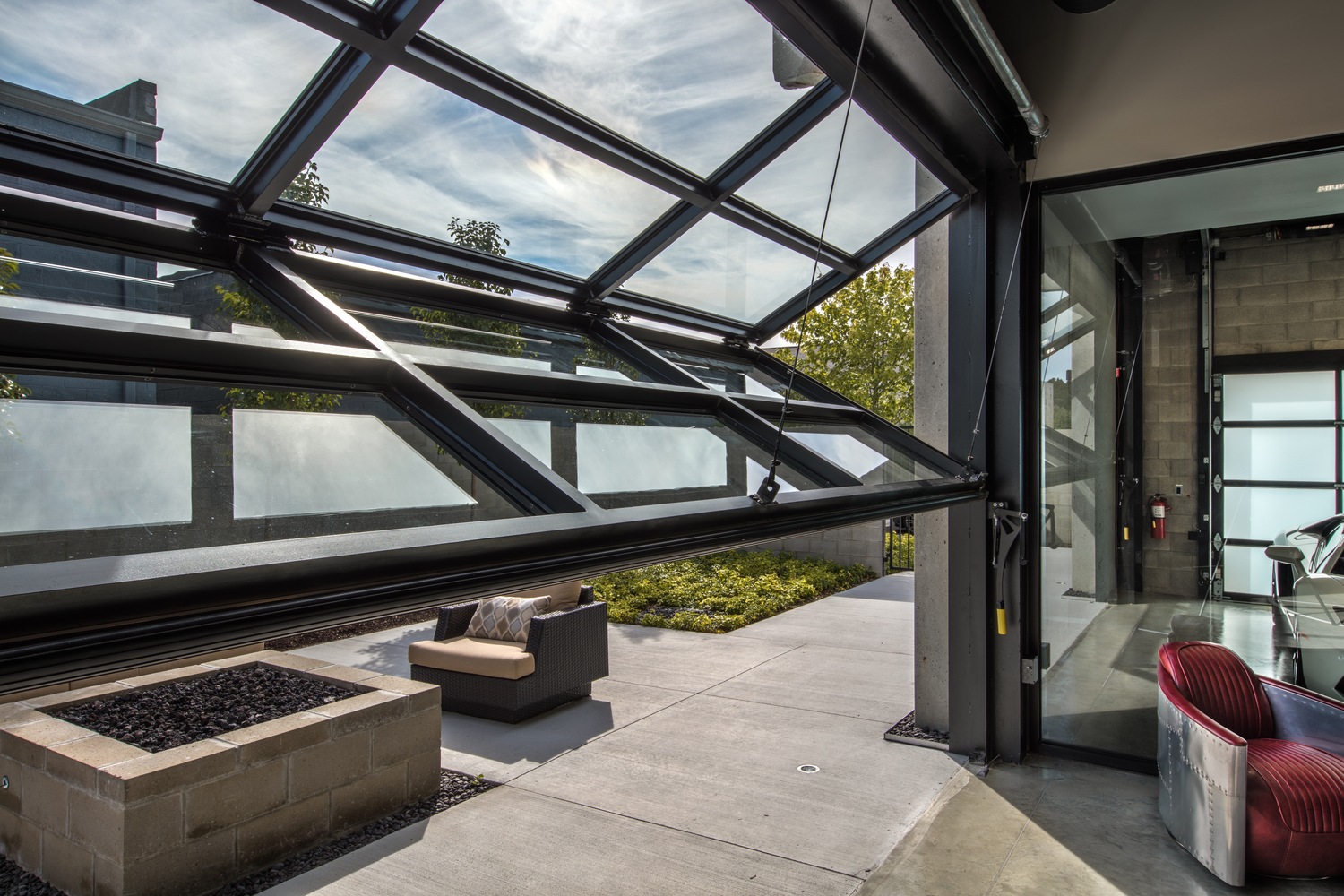 The interior of the project carefully blends industrial elements with custom stained cedar walls and a theatrical “Hollywood glam” selection of finishes. Much of the interior was built as separate structures within the original warehouse as the existing building had a limited structural capacity. These new structural frames and beams were left exposed to identify with the original architectural character. Luxurious finishes and nuanced details coexist harmoniously with concrete block and raw steel to create an environment that stimulates the senses and encourages creativity. With construction starting in May of 2014 and finishing in August of 2015, Royal House Recording has been fully booked ever since with a lot of talent entering its doors. Their success continues to grow more and more and has seen a lot of support from the music community of Greater Detroit. 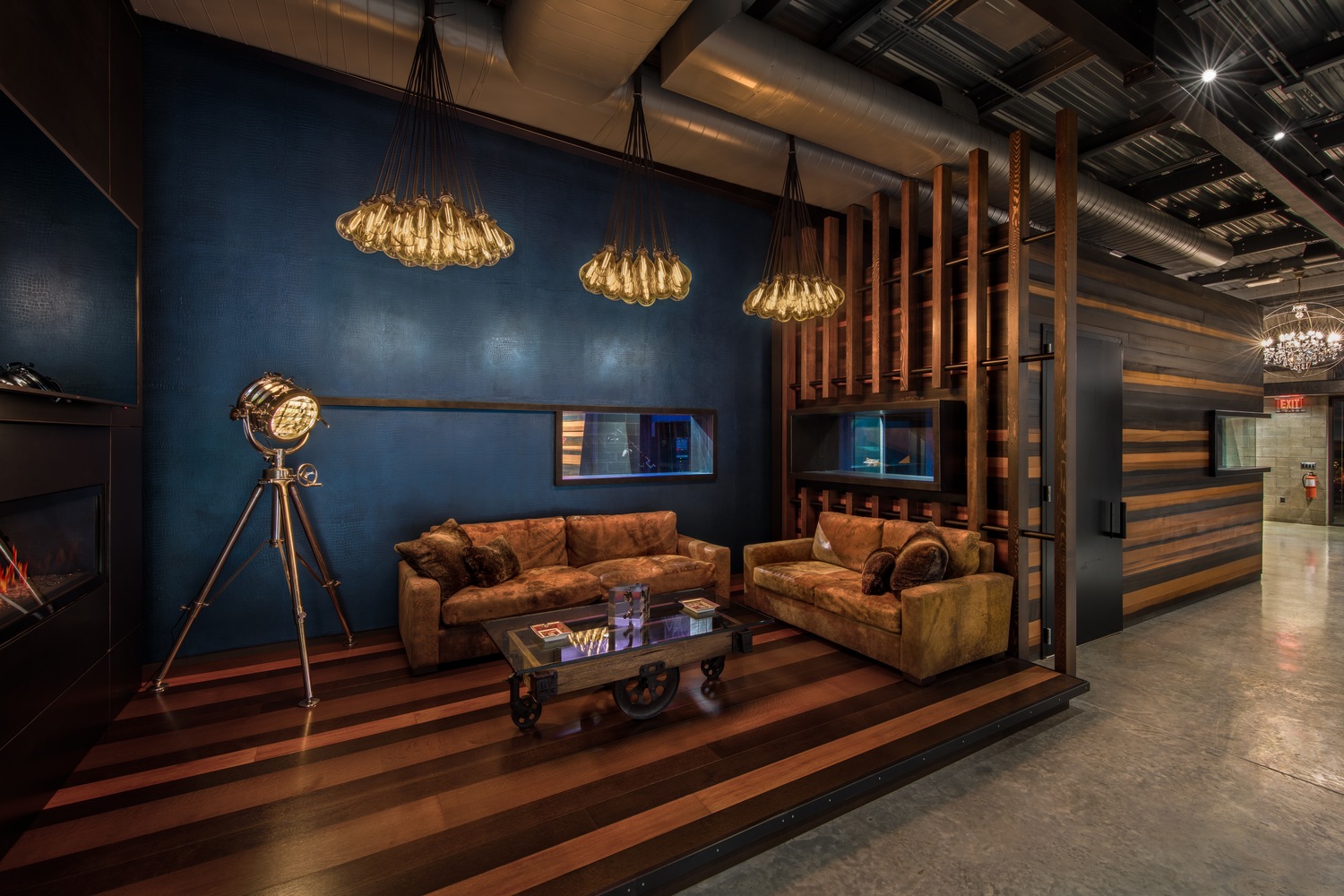 Despite a burgeoning production career in California, Roger Goodman couldn't help but think about his native Detroit from afar. Since moving to the Golden State and garnering Grammy nominations, the young music maker saw a change in the definition of the word "producer" and sought to find a return to form in his hometown.

"Every single person with a laptop became a producer overnight," Goodman says. "I wanted to get away from all of that, and kind of recreate what this really is, where it really came from and where it really started, and that's in Detroit, Michigan. People used to come up from up from the south, come out from the west, come from New York to record. People wanted to track with the producers in Detroit."

Sowing the seeds for a new recording studio based in Southeastern Michigan, Goodman began the arduous process of realizing his dynamic vision. The build began with Goodman and his crew tearing down an existing property, pouring concrete for each room separately and including a special absorption gel to eliminate all potential low vibrations. Taking every measure to ensure the perfect end result,Royal House Recording was a dream that turned into reality.

"I figured if I could build my own Fantasy Factory, people would be blown away by it," Goodman says, referencing pro skateboarder Rob Dyrdek's California-based skate mecca.

Throughout construction, Goodman teamed with studio designer Glenn Brown and Vintage King's Jacob Schneider to complete the build-out of the studio. For the main hub of Royal House Recording, Schneider and Goodman opted for a 48-Channel Solid State Logic Duality SE. Winning the team over with its sleek design and light build, the SSL console offered Royal House a more mobile and agile option to the large, stationary vintage desks in many recording studios.

"People won't be able to come here and say, 'They didn't have this' or 'they didn't have that' or 'this was mediocre, that was mediocre,'" states Goodman. "I relied on Vintage King to make sure that was the case, and in the past few months that we've been open, people come in here and are floored at the gear that we have, the setup and the arrangement. Just everything from the guitar amps, guitars, the outboard gear, the SSL console, and just the way the whole network is set up. And the room; how user-friendly it is, how producer-friendly it is."

"It was really an amazing opportunity to help Roger build his dream studio," Schneider says. "Roger really gave us the freedom to pick out the gear list. From the mic locker and front end, down to mixing and monitoring, this studio was built to cover anything that could be thrown at it."

With an overall design aesthetic focused on making clients extremely comfortable, Roger Goodman has truly created a music maker's paradise that breaks from the confines of the traditional recording studio. Packed with a gym, kitchen, lounge, garage, basketball court and outdoor patio, the Royal House Recording experience is one that provides off-site luxuries within a few steps of the studio and live room.

In terms of sonic sensibilities and the comforts of home, this new studio leaves nothing to be desired. That is, unless you're Roger Goodman. Always looking to improve his recording space, he has a constant craving to keep advancing forward and one particular addition is always on his mind.

"I’ve always wanted my own piano and that’s the one thing I don’t have," says Goodman, who took lessons as a child. "Most people would just stick a Yamaha in there, but I really want to take my time."

Royal Oak, MI (February 18, 2016)—Detroit has always been known for its recording studios, like Motown and United Sound Systems, but it’s not all about legacy facilities. A new generation of studios is emerging, including the brand-new $3 million Royal House Recording studio, located in the Detroit suburb of Royal Oak, which was built from the ground up by Detroit native Roger Goodman.

Goodman relocated to his hometown after 15 years as a producer/engineer in Los Angeles, having attended The Los Angeles Recording School and Full Sail University before embarking on his career as producer/engineer. While in L.A., he worked out of studios including Record Plant, Larabee and Paramount, producing and engineering artists such as Lupe Fiasco, Lil Dicky, Dej Loaf and Asher Roth, picking up Grammy nominations in the process.

Goodman, a third-generation Detroiter, said, "We're in the same neighborhood as Eminem's 54 Sound and my goal is to further reinvigorate the Detroit scene, which has been a major recording destination since the '40s."

"Vintage King is really at the top of their game," says Goodman. "I worked with Jacob Schneider and he would come to the studio at the drop of a hat. They gave me lots of options from a list of boutique items to the necessary standard gear. Now we have everything from choice guitars and guitar amps, outboard gear, the SSL console, and they guided us with incredible input on how the whole network was to be set up. The studio is so user friendly and producer ready—just the way it should be."

Neo Motown: A New Age in the Recording Industry 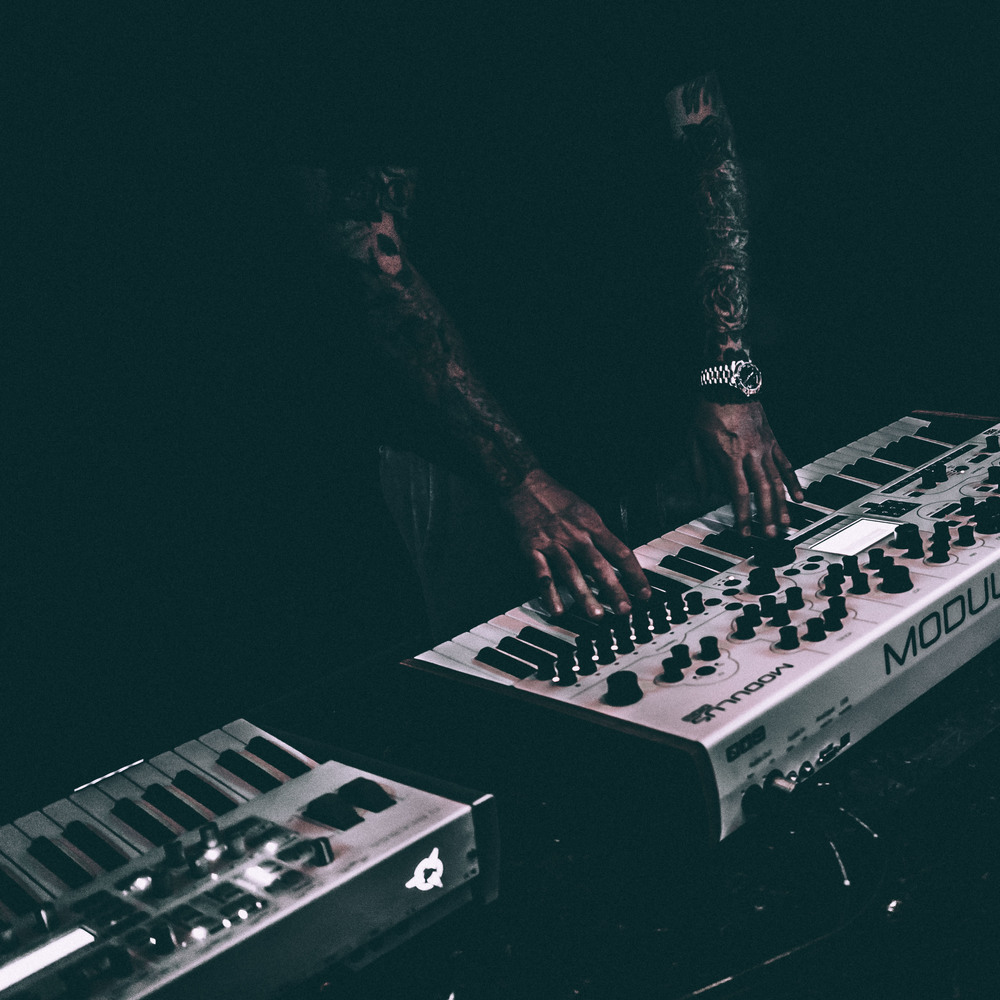 With the rise of the internet, the playing fields of many industries have leveled. Major corporations are now falling behind web savvy independents because they are unable to keep up with trends that are now driving forces for success. In general, the traditional record business model is dead as physical sales decline. Even digital sales are not stellar due to the ease of pirating mp3s. As a result, the recording business model has seen a shift toward music video streams at the forefront of the marketing campaign.

The major source of income for artists, however, is not through the sale of music but rather through touring and merchandise. With the advent of social media and the internet, music stars are much more accessible than historically witnessed.

Not only that, but this gives the general public the power to choose organically who they like--no longer allowing recording corporations to use marketing tactics to sway opinions. Those with true talent that have been able to harness the power of the internet have been generating just as much buzz and, in some cases, revenue as major label artists like Macklemore and Chance the Rapper. The rise of streaming music services, where the major labels’ control is weaker, and the decline of FM radio, where the labels’ control is powerful, has had a clear effect on the power of indie.

In fact, Independent music has officially taken over and is gaining more sales than any label group in 2015. In 2007, indies controlled 25.8 percent of the music business, No. 2 behind Universal Music Group’s 28.8 percent share. By June 30, 2013, indie — a universe that includes Taylor Swift, Jason Aldean, Bon Iver, and Mumford & Sons — leapfrogged Universal by growing its market share to 34.5 percent, according to Nielsen SoundScan. It seems the way to achieve mainstream success, as witnessed by Macklemore and Ryan Lewis, is to remain independent but acquire Major distribution. 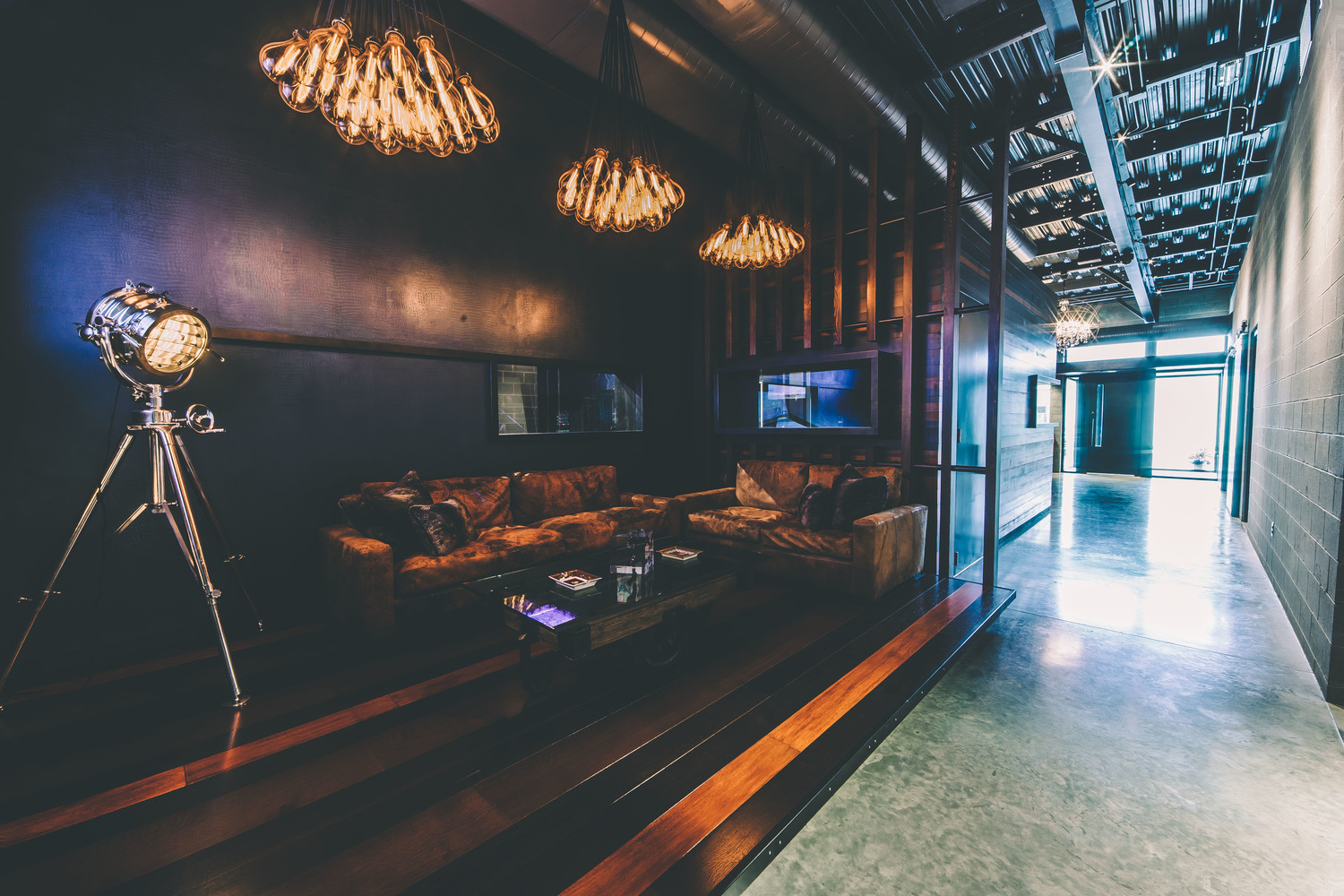 This internet phenomenon is swooping the world in the form of an independent uprising and has created opportunity for talented individuals who strive for exposure regardless of geographic location. One such location that is seeing a resurgence is Detroit. Once known for the Motown sound that became a breakthrough land for hits, Berry Gordy, the founder, picked up his bags and moved operations to LA after the race riots.

Fast forward and it might be Roger L. Goodman who is picking up the pieces forty years later. Roger has been working in the industry for over ten years and has been sought out by the likes of Chris Brown, Asher Roth, Rich Hil, Boldy James, Dej Loaf, Lupe Fiasco, and Lil Dicky for his production skills and audio engineering capabilities. The aforementioned artists often frequented Roger’s studio in Los Angeles because of the superior setup whether due to the crispy vocal chain or the way a synth line was eq’ed -- Roger possesses a certain x-factor that exudes quality. As a self proclaimed gear head, Roger strives for perfection in the form of sound waves. After having reached the peak by receiving a grammy nomination in 2012 for his work on “Lasers” with Lupe Fiasco, Roger vowed to take his talents back home to Detroit. 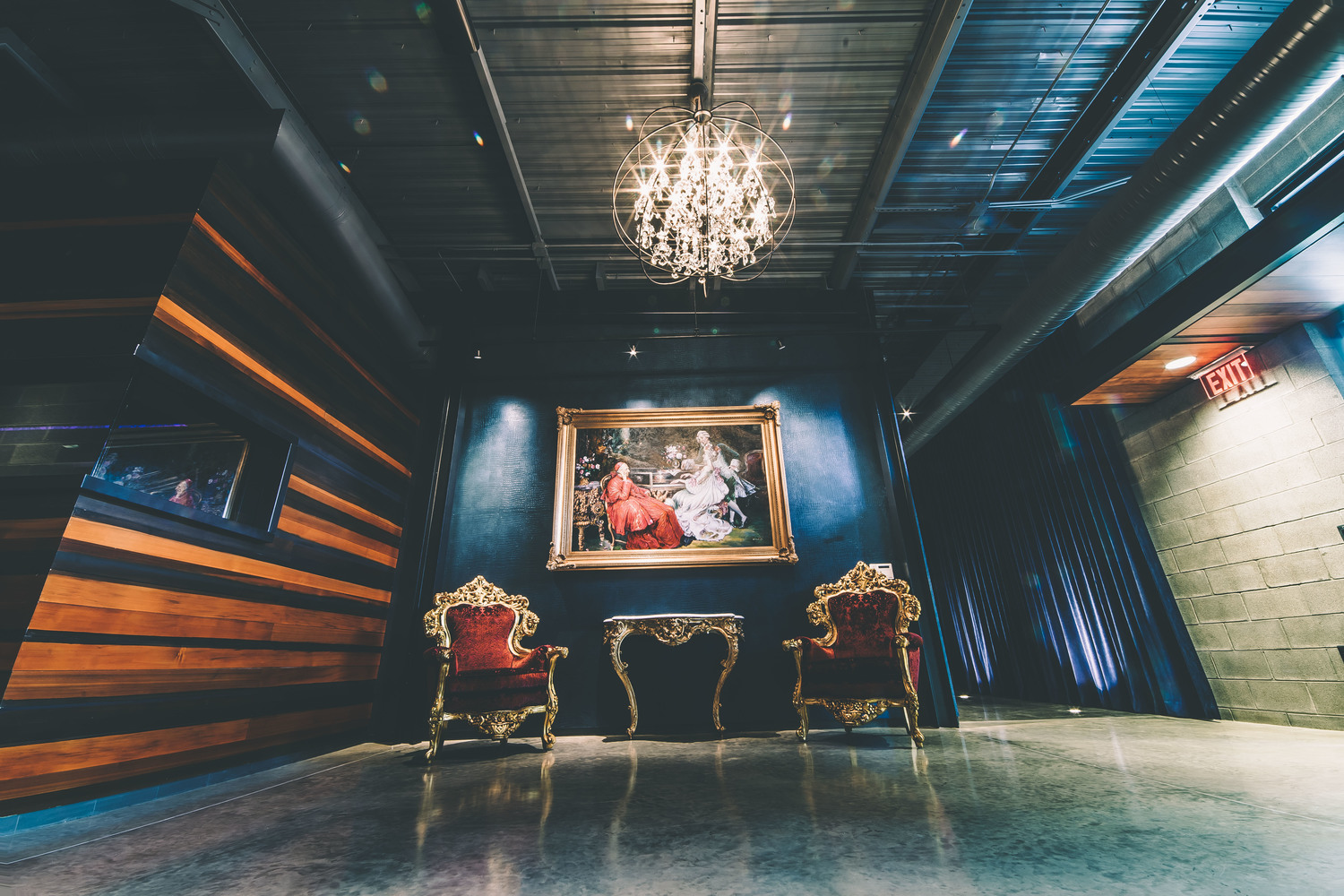 It has been three years in the making and Royal House Recording has just now opened for business. The recording campus represents the pinnacle in quality in terms of construction, gear, and aesthetic. After teasing images of the studio on the official Instagram, many super stars such as Justin Bieber, Eminem, Kid Rock, French Montana, and Meek Mill have expressed interest in recording projects at the Detroit studio. Could this be a new age recording boom in Motown? All the signs are pointing towards it and Royal House Recording is at the forefront of the new wave of independents making an impact on the national scene. 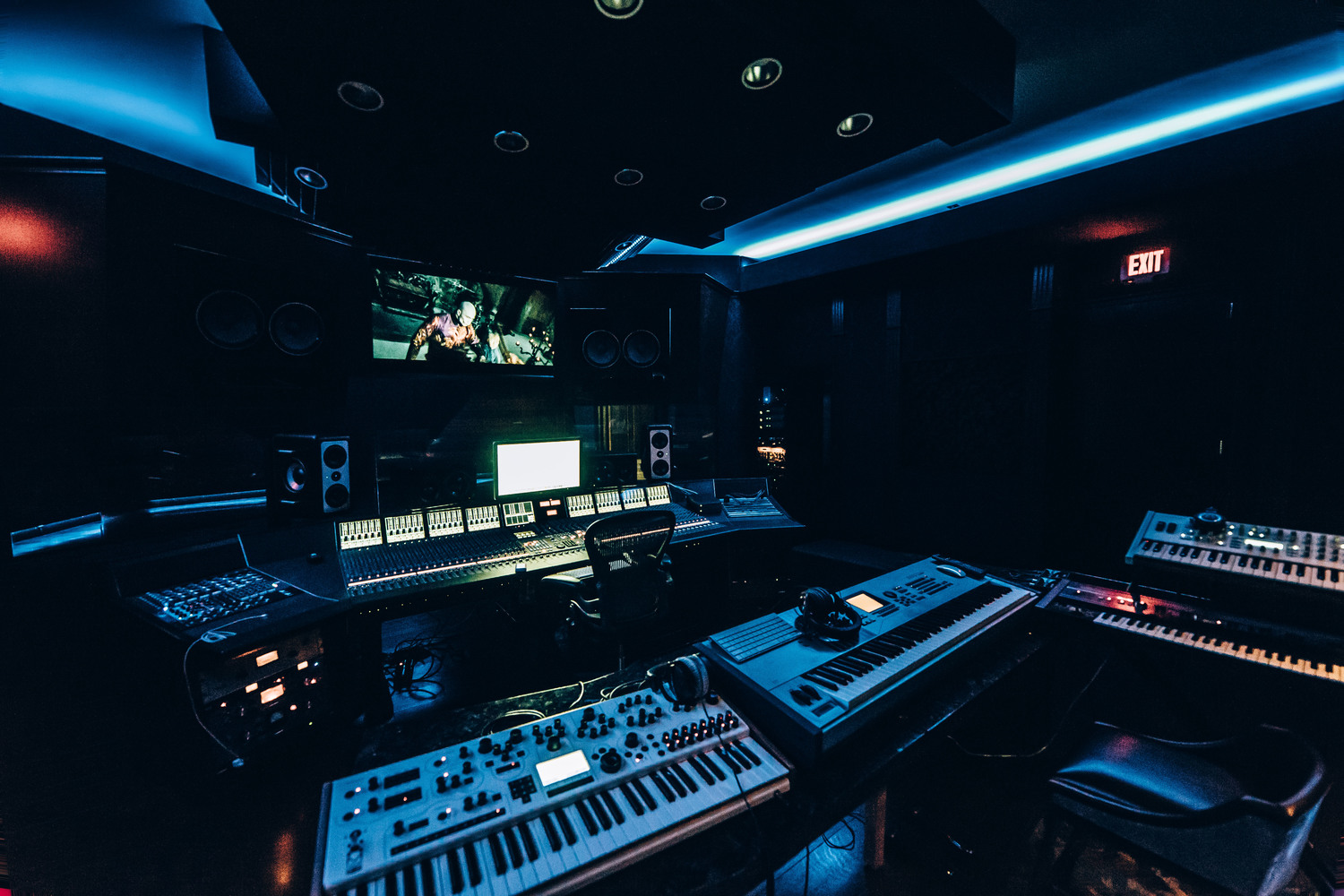